Home » Is It Better to Be a Captive or Independent Insurance Agent? 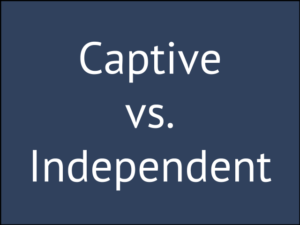 As you start your insurance career, one of the questions you will eventually ask is whether it’s better to be captive or independent insurance agent. In this article, I’m going to talk about the differences between these two types of agents. I’ve been both a captive and independent agent and so I’ll give you my take from both sides and maybe that will help you decide what you want to do.

What is a Captive Insurance Agent?

A captive agent is an agent that has a contract to work specifically through one and only one agency. They can only write insurance policies that agency allows them to write and those policies have to be written through them.

What is an Independent Agent?

If you are an independent agent on the other hand, you are in control of what companies you want to work with it. You can work direct with an insurance company, partner up with other agents and general agents or write business through independent marketing organizations (IMO’s).

Captive agencies are more like traditional employers. An independent agent is like owning your own business. So let’s talk about some of the other differences between captives and independent agents.

Those are some of the differences I see in between captive and independent agents.

Which is Better – Captive or Independent?

Whether you choose to go as a captive or independent will be tied somewhat to your tolerance for risk. A captive might provide you with a better starting financial safety net or might teach you the business quicker than going out on your own. And if you are more risk averse that will appeal to you.

Many agents choose a captive because that’s how they were introduced to the idea of being an insurance agent. Agents also might be drawn to the training programs captives have in place. Again, this would also appeal to you if you prefer an agency to help get you going. This is especially true if you need help getting appointed to insurance companies that they work with like in the property and casualty business. In the P&C business, you might not be able to get appointed to certain insurance companies without their help.

An independent agency on the other hand is appealing to those who want complete ownership and control of their operation. People with strong independent personalities and higher risk tolerance would also be better suited to going the independent route.

Which is better will also be determined a lot by your financial situation at the time you begin. It’s a lot harder start as an independent with no resources although it can be done.

I first started with one of the big mutual insurance companies as a captive. I answered a help wanted ad and didn’t really know that being independent was an option. I worked at that insurance agency for five years before going out on my own.

Once I became an independent, I still worked with another general agent. But the difference was that I was more in control of what I was doing than before. To me, having more control over how I worked with my clients made a huge difference to me personally as far as mindset.

Since I think the training programs at the big mutuals and some other captives are overrated, I’d say the hardest part of being independent is just like any other business you might start. At first it’s hard because you aren’t making anything and you have to build every aspect of it.

If I had to choose to start my career over again, I’d definitely be an independent agent. That’s because it suits my personality better. But my advice would be, be prepared to struggle financially to begin with.

The reality of the insurance business, it’s not so much how much you know about insurance as it is how many people you meet with. If you don’t become an expert on how to find clients, then either is a bad idea.

In the end, your clients are really buying you. If you trust the insurance agency or companies you are working with, they will too.

Insurance is a people business. What it comes down to is that people say yes to people they want to work with. So while name recognition and training are important and might get you in the door to talking with prospects, in the end they buy you.

For that reason, I always suggest people be independent agents over captive agents all day long.

Let me know in the comments how you started and what your feelings are about which you think is better, captives or independent agents.