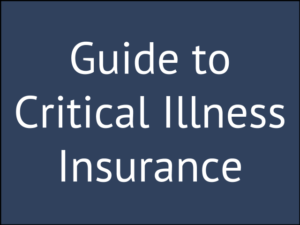 RESOURCE: This guide is a part of my larger guide called The Definitive Guide to Workplace Benefits. Be sure to check it out.

What Is Critical Illness Insurance?

Since benefits are paid directly to you and not to a hospital or other medical provider, you can use the money however you wish. You can use the money to pay for health care expenses, bills you may have, loss of income or even put it towards a new car if that’s what you want to do.

Once the claim is paid, it’s your money to do with as you please.

While these policies don’t help you with every medical problem, at least if it’s one of the covered critical illnesses, you can receive benefits.

What Does Critical Illness Insurance Cover?

But to give you an idea of the types of conditions you might see, below is a sample list of the conditions I’ve seen covered by the last three companies I reviewed.

While you might see a condition in your policy that’s not listed below, you’ll probably definitely see all of the top five most common critical illnesses which are 1) heart attack, 2) cancer, 3) kidney failure, 4) stroke and 5) coronary bypass surgery.

In addition to the above sample of conditions, I’ve seen additional illnesses listed in coverages for children – like Type 1 diabetes, cystic fibrosis and down syndrome to name a few.

In most cases, the lump sum payment for each covered critical illness will be paid out at a 100 percent. Some conditions are paid out at a lower percentage like 25% or a flat amount.

One of the most confusing aspects at least to me with these policies is how cancer is covered. Oftentimes, you’d think if you got diagnosed with skin cancer, you would qualify for full cancer benefit. But it really depends on the definition of cancer. There’s skin cancer, carcinoma in situ and life threatening cancer. Depending on which one you have, they all pay differently.

Do I Need Critical Illness Insurance?

One question I get asked a lot is why should I buy critical illness insurance?

It’s no secret that health insurance costs have risen dramatically. In response, employers have looked for ways to contain these rising costs by increasing the percentage of the premiums employees have to pay as well as increasing the deductibles, copays and coinsurance amounts they are responsible for as well.

To give you an example of what’s becoming a common trend, a company I recently enrolled into a critical illness plan had a group health insurance plan with a $5,000 individual deductible and a $10,000 family deductible. Nothing was covered by the insurance until the deductible was met. There were no copays at the doctor and no prescription copays.

While the insurance would kick in and pay 100 percent of the claims after the deductible was met, most people won’t have that kind of money to shell out on top of the premiums they also pay.

So to help employees cover some of these costs, insurance companies began offering policies that paid cash to you in specific situations. Those situations are when you are diagnosed with a covered critical illness as defined in the policy.

Because these out of pocket expenses medical expenses have risen so dramatically, that’s why you might need critical illness insurance.

Nine Reasons You Should Get Critical Illness Insurance

Those are nine reasons you might want to buy critical illness. You should consider those reasons in making your decisions on whether to buy a policy or to waive your opportunity.

Now let’s talk about some additional factors you should look for when buying a critical illness policy.

What To Look For When You Buy A Critical Illness Policy

When I meet with employees, I share with them the rules that govern their policies. There are so many rules, most employees probably forget most of what I tell them. This is especially true if you are doing a core enrollment at the same time and reviewing all of an employees benefits.

With that in mind, here are some additional things that you might need to know when you buy a critical illness policy.

That’s a good recap of some important things to look for when you buy a critical illness policy.

Let’s move on and talk about who you can cover under a critical illness plan.

Who Can Be Covered?

While the employee and spouse have to pay a premium, it’s pretty common to see children covered for free as part of the policy. Employees often ask if they can cover parents or other family members outside the spouse and children but that’s not the case in any critical illness policies I’ve seen.

How Much Insurance Can You Buy?

Lump sum coverage amounts on employees vary from $5,000 to $50,000 but can be higher. Depending on the insurance carrier, the spouse can buy either a percentage of the employee amount or up to an equal amount.

Children are a percentage of the employee’s face amount as well.

NOTE: If you are wonderingIf you have high deductible insurance plan, have a family history of any of the critical illnesses or smoke, I’d encourage you to purchase a policy. If For a more detailed list of reasons you might consider read my article called Should I Buy Critical Illness Insurance.

Of the policies I reviewed, each of the policies would pay more than once. But the rules from company to company are going to vary. Some companies won’t pay for the same condition twice, others lump them into categories or buckets. Others, allow unlimited payments as long as enough time elapses between the diagnosis.
An occurrence is a diagnosis. Here is some common phraseology you might see regarding the definitions of occurrences.
You’ll have to read the contracts and sales materials for the policy you are considering purchasing to know for sure. All companies will handle all diagnosed critical illnesses that occur after the first one differently.

What Are Health Screening Benefits?

Most insurance companies include a health screening, or wellness benefit as part of their critical illness policies. This is a one time per year payment of $50 to $100 that an employee can receive if they get a health screening test.

What About Pre-existing Conditions?

These days, as an employee, you can often get a critical illness policy without any medical questions. (at least the first time it might be offered to you) Whether coverage extends to pre-existing conditions depends on the insurance company and the types of underwriting they offer. Some won’t cover them at all and others require a certain amount of time to have elapsed before you will be covered. I talk more about how pre-existing conditions are covered in my post about pre-existing condition limitations and exclusions.

When Does Coverage Begin?

Coverage begins at different times for different insurance companies. Some companies begin coverage the date you sign up and others at an effective date in the future. It’s also not uncommon to have a waiting period of 30 days after your coverage is effective for coverage to actually begin.

What Should I Do If I Am Diagnosed?

Obviously, once you are diagnosed you should submit a claim to the insurance company. If everything is in order under the definitions of the policy, you should receive payment without any problem.

Some policies are guaranteed issue but exclude payouts on pre-exisiting conditions. You might receive a diagnosis during a pre-existing period and know you won’t qualify. It’s tempting to not file a claim and turn yourself down.

I always tell everyone to file a claim if you have a diagnosis and make the insurance company decide. Don’t decide for them even if you know you’ll be turned down because of a pre-existing condition clause. I also recommend letting your agent know that you have a claim so they can assist you if you need it and guide you through the process.

A diagnosis after the effective date in a pre-existing period or during a waiting period still counts as an initial diagnosis even if you don’t report it. You might as well report it anyway.

Here’s a list of the common questions I get about critical illness:

As Always Everything Depends – Read The Contract!

The best thing you can do is always read the contract. Every insurance company and every offer is different and may vary with the information in this post. In the end, the language in the contract is what matters.

Do you own a critical illness insurance policy? Let me know your reasons for buying it in the comments below.