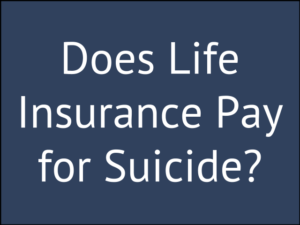 In this article, I wanted to answer a common question I get. That question is does life insurance pay for suicidal death?

Whether it will pay for suicide or not will primarily depends on four things.

Those four things are:

Knowing the answers to these questions will help you know whether or not a life insurance policy will pay for suicide.

Since suicide is the 10th leading cause of death in the United States, let’s talk more about how insurance companies handle suicide and then go into some other important things you might need to know.

Generally, the suicide clause in a life insurance contract excludes payment for suicide for the first two years

However, after two years have passed, unless the policy has been reinstated (see below), suicide would no longer be excluded.

While this is the general rule, you actually need to know a few more things to determine if and how a suicide clause might apply.

What kind of life insurance is it?

Whether a life insurance company will pay for suicide first depends on what kind of life insurance it is. Let’s talk about three types and how suicide might be treated.

As you can see, it’s important to know what kind of life insurance it is. If you are dealing with individual life insurance, then there are three other things that might affect a claim because of suicide.

Where do you live (or where did you live when you bought the policy)?

While most states in the United States allow insurance companies to exclude suicide for the first two years the policy is inforce, there are a couple of states that only allow for suicide to be excluded for the first year.

If you buy a policy in one state that limits the suicide clause to one year and later move to another state that allows it to be excluded for two years or vice versa, I’m not really sure what state would apply.

For those reading this that have bought their life insurance outside the United States, the best advice I can give is that you’d have to read your life insurance contract.

Since suicide is generally excluded for the first two years the life insurance is inforce, the next thing you’ll want to figure out is how long have you had the policy.

Keep in mind that the date you applied for the life insurance and the actual policy date might be two different things. Most likely, the policy date is probably when the exclusion period might begin.

If you have ever let your policy lapse and asked the insurance company to reinstate the policy, the time the suicide clause would be in effect would be reset and start all over again.

This means that even if you have had your policy for 4 years, let your policy lapse and then request that it be reinstated, you’d likely have to wait another two years before suicide would be covered again.

Always file a death claim when someone dies

No matter how someone dies, you should always file a claim and make the insurance company make a formal decision.

If the death was due to suicide and then denied under the suicide clause, the insurance company will probably refund the premiums paid.

But, things are often not so simple. I once had a case where a policyholder accidentally shot herself but they ruled it a suicide later.

If you are contemplating suicide, please ask for help

If you are reading this because you or a family member are contemplating suicide, please get help. Reach out to the National Suicide Prevention Lifeline at (800) 273-8255.

In general, life insurance companies exclude suicide for the first two years an individual policy is in effect. You’ll want to read the actual life insurance contract to see what kind it is, what state you bought it in and how long you have had it.

Have you had to file a death claim for suicide? Let me know in the comments what your experience was with the insurance company.

Also, if you need some individual life insurance, and want to help support this site, why not let me be your life insurance agent.

To get started, fill out this form below.