Home » How Do Pre-Existing Condition Limitations and Exclusions Work? 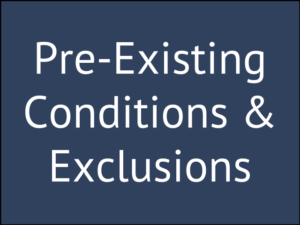 But, that’s not the case.

Pre-existing conditions, or “Pre-Exes” as they are called in the insurance business are alive and well in other types of policies.

Once you are approved for a policy, insurance companies deal with pre-existing conditions in one of two ways. Those are:

So, a pre-existing condition can either be excluded for the life of the policy or only for a certain period of time.

Should I Buy A Policy That Has A Pre-Ex Clause In It?

A lot of employees when you first tell them about the pre-existing condition limitations or exclusions will often end the discussion there, but that is not always wise. In particular when a guaranteed-issue offer is on the table.
A guaranteed issue policy means there are no medical questions and you can just sign up for the policy. While I’m not a fan of a total exclusion of a pre-existing condition, a limitation period is reasonable and preferred to being declined for a policy.
A limitation period often allows insurance companies to expand the offer to a larger group and reduce or eliminate underwriting requirements which is a good thing.
As long as you understand the pre-ex limitation, if you can get a guaranteed issue offer that limits the time period on claims for pre-existing conditions and you get through the time period, the pre-existing condition limitation no longer applies.
As always, you’ve got to read your contracts to see exactly what the terms are for the policy you are looking at.