Home » 9 Surprising Things I Learned About Health Insurance This Year 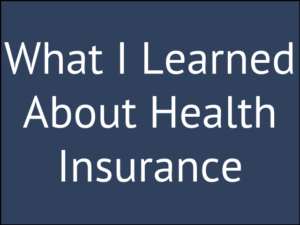 As a self-employed person, I use to pay the full cost of my health insurance premiums. A few years ago, my premium was roughly $1200 per month. Back when I started paying my own premiums, I remember one of my clients charged their employees $1 a month for their coverage.

When they raised the premiums on those employees just a little bit, the employees were understandably annoyed. But, they also were incredibly lucky they didn’t have to pay the full premium. Most of it was subsidized by their employer.

I know one year, my total outlay of premiums, copays, deductibles and coinsurance was over $22,000 in one year. It’s amazing that it was that much considering my family didn’t have anything major like a critical illness to deal with – just chronic medical conditions.

Eventually, I went on an employer sponsored plan that helped pay the cost of my premium which was a big relief because back then, pre-existing conditions weren’t guaranteed coverage.

I was on that plan for about three years and then went on the exchange to buy a policy. The removal of the threat of being denied coverage due to pre-existing medical conditions was a huge relief for my family. I was on the exchange policy for a month.

After that, I went back on an employer sponsored plan which changed to another carrier during this time.

Now that you know the background, let’s talk about what I learned about health insurance over the last several months.

The Need For Cobra Seems To Have Disappeared?

With the option to go on the exchange to get a policy, I would forgo my opportunity to go on COBRA and went right to the exchange. I don’t remember exactly, but I think my premium would have doubled with COBRA. I estimate I saved about $700 in premium per month with a smaller deductible and a 10 percent coinsurance as opposed to 20 percent under my first employer sponsored plan.

I chose the gold plan on the exchange and didn’t qualify for a subsidy. I could have bought my plan directly from the insurance company at about the same cost but still elected to buy it through the exchange. I opted for a gold plan.

One thing I didn’t realize was that I believe I could have elected COBRA retroactively. In any case, it took awhile to get my COBRA information from my employer and I based my expected premium on some sort of benefit breakdown the company had given me.

I didn’t know it at the time but my FSA was underfunded when I left my employer. The use it or lose provision that most often effects employees who put in too much money and have to forfeit it applies to the employer when you leave an FSA midyear and leave it underfunded.

While I had read stories on the internet about employers trying to recoup their money, I half expected my last paycheck to be less because of I was underfunded. But, it wasn’t.

This is one of the reasons there is often a waiting period to participate in an FSA. The employer does assume some risk of underfunded accounts occurring since funds are advanced on day 1.

It’s probably also why the amount you can put in was reduced not too long ago. I wouldn’t be surprised if FSA’s disappeared completely to eliminate all risk for the employer but we will see.

Pre-Certification Can Happen After The Fact

My son needed an insulin pump for his type 1 diabetes so I checked with the insurance company to see what was required. I was told that it had to be pre-certified. When I talked with the medical device company, I let them know of that requirement.

They explained to me that they worked with the insurance company all of the time and would definitely pre-certify the claim.

Of course, when the claim came through it was denied. The reason? It wasn’t pre-certified. I was concerned I’d have to pay for the insulin pump but evidently you can pre-certify after the fact.

I’ve been accustomed to large claims like that being denied on the first go around so it wasn’t a surprise it was initially declined. It took about 3 months for that claim to be paid.

Not Everyone That Buys Insurance On The Exchange Has Claims

I had gold plan policy that I bought on the exchange. I had the plan for one month and never used it. So contrary to all of the screaming the insurance companies are channelling through all of the media outlets about losing money, I was a profitable customer in the gold plan.

I Paid My Deductible Three Times This Past Year

Since I was on four plans, I was subject to the deductible on each of the those plans. I had to re-meet my deductible on three of them which drove up my cost of insurance for the year.

I’d try and scream as loud as the insurance companies that I lost money but I don’t have the media reach they do. I just have this website.

In the end, the same insurance company got my deductible twice.

The insurance company will find a way to get the same amount of money out of you each year one way or the other. They’ll either charge you more in premium and less in the back end. Or, if they give you a break on the premium will charge you more in the guts of the policy.

If you use the plan what matters most is the amount of the employer contribution, or subsidy if you get a policy on the exchange in terms of getting you an overall lower cost.

If you don’t ever use the plan then premium matters most.

While I save a considerable amount of premium on my current plan, my coinsurance is 30 percent which drives up my cost. My exchange gold plan had a higher premium but a 10 percent coinsurance amount.

A lot was made about the Affordable Care Act limiting your choice of doctors. But it was the way the employer sponsored plan structured their networks that prevented my son from using a doctor he had used since he was born – not the ACA.

I’m Not A Big Fan Of Prescription Drug Tiers

Rather than spread the cost of prescriptions across all prescription bought by members insured under a plan, drug tiers spread that risk across the users of the higher tier drugs.

It’s stupid that my son should have to pay $90 for the same medication someone else gets for $10 who is on medicare.

A Significant Milestone On The Fourth Policy – No Premium Increase

My last plan was the first time that I can ever remember that my premium and plan stayed the same when the plan year switched. I can’t remember not having a premium increase in decades. So all things considered, that’s the most positive thing that happened on my four plans.

These are the most significant things I learned in the last year about my health insurance plans.

What are some surprising things you’ve learned about health insurance?