Home » 7 Steps to Beat Surprise Out of Network Medical Bills 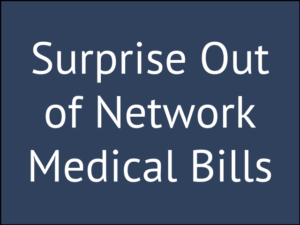 A few months back, I had to take my wife to the emergency room. I have two hospitals within 5 minutes of me. Both are considered in network hospitals in our medical plan. I chose the closest of the two.

After being transferred to another in network hospital and a six day hospital stay, she was released from the hospital.

Within a month or so after, the medical bills started to roll in. I carefully reviewed them along with the Explanation of Benefits statements from the insurance company.

This is downright stupid to me.

After doing a little research, I discovered that getting surprise out of network medical bills is pretty common. Of course, it wasn’t very shocking to learn it’s a common practice. In fact, here’s a guy who had a heart attack and ended up owing $109,000 dollars.

Unfortunately, this practice is pretty unfair to policyholders but of course, it’s perfectly legal for insurance companies to do it for the most part.

Since I don’t feel I owe this bill, below are the steps I am going to take to deal with it. I can’t guarantee it will resolve my problem or yours if you have it. I’ll keep you posted.

But first, let’s go over why receiving an out of network bill is a problem.

The Problem with Out of Network Bills

When you receive medical treatment, after the insurance company decides if the medical treatment is covered under your policy and is medically necessary, they look to see whether the provider is an in or out of network provider.

Here are the steps you should follow to avoid and tackle these out of network charges.

Step 1: Always use an in network provider

While it might seem obvious, the first step in avoiding problems with unexpected out of network medical bills is to only go to in network providers.

Unfortunately, it’s on you to find out. If you get billed by an out of network provider because you didn’t bother to check or because you personally wanted to use that provider, there isn’t much you can do about it.

Remember, networks can change too. Be especially careful if your health insurance company changes.

Check all your doctors and pharmacies before you use them. Think ahead. If there is an emergency due to an accident or health issue, know where you should go before an emergency happens.

In the case of my wife’s emergency room visit, we knew ahead of time that both hospitals were in network.

Initially denied, the insurance company eventually paid the anesthesiologist bill after I complained.

I think they deny these initial bills because they are hoping you will just pay the bill without challenging the decision. I’ve talked with lots of people who tell me they have done exactly that.

This just lets the insurance company off the hook for bills they owe.

With the high cost of health insurance premiums, you should never cave in so easily.

Don’t pay the bill until you know for sure you are indeed responsible for the amount.

Step 3: Dispute the decision of the insurance company in writing

Once you receive the Explanation of Benefits (EOB) from the insurance company, review it to see how they handled your provider’s claim.

In our case, the EOB stated that the bill was denied because the provider used in the in network facility was an out of network provider.

I’ll let the insurance company know the circumstances in our situation in our written request and ask them to review it.

Hopefully, they will review it and pay the claim. If not, I’ll move on to the next step.

Step 4: Dispute the bill with the provider in writing

Next, contact the out of network provider in writing and let them know the situation. Advise them that you will not pay the bill because you went to an in network provider.

Step 5: File a complaint with the Department of Insurance and the Attorney General in your state

Filing complaints like these will often get your situation resolved. But if not, the more people who file formal complaints will put this on the radar as an issue that needs to be solved.

Some states have already passed laws helping consumers getting unexpected out of network bills. While some of these laws have problems distinguishing between self insured and fully insured plans, at least it’s a start.

If your bill is large enough, contact your local news channels and let them know about your problem. If it’s completely outrageous they may be able to help.

The guy I mentioned above followed a similar strategy and got the $109,000 out of network bill eventually cut to $332.29.

Step 7: Refuse to pay the bill

If all else fails, then you can just refuse to pay the bill.

They can certainly put a mark on your credit report. They are hoping that other creditors you need to work with will force you to pay their bill even if you don’t really owe it.

The worse thing that could happen is that the provider could take you to court over the amount due.

Most people lose in court because they don’t defend themselves.

Defend yourself. Keep copies of all of your interactions with the insurance company, the provider and the state.

Make a judge decide if you have to.

Update on my wife’s surprise bill

However, we had already met my wife’s deductible. The explanation of benefits clearly showed we had.

After a lengthy discussion with her, she finally put me on hold and got another representative to take my call.

I explained the situation to the new representative who understood what she was looking at. She agreed that we had met our deductible. While this was indeed an out of network provider, they did pay it with in network benefits.

Only problem was that this was a balanced billing situation where the provider was charging the balance above the allowed amount.

She offered to have the claim re-processed and told me that should fix the problem.

After I spoke with the insurance company, I contacted the provider and let them know. In both cases, I wrote down the contact information of the people I spoke with.

The next step for me is to wait for a new explanation of benefits from the insurance company to see if the claim was processed correctly.

I’ll update this once I receive it to let you know.

When you don’t say anything when you have a valid claim, you only do them a favor.

Use the suggestions above to resolve your out of network bills when you went to an in network provider.

Have you received a surprise out of network bill from an in network provider? Let me know what happened in the comments how it worked out.

Also, let me know if you used any of my suggestions to help you out.