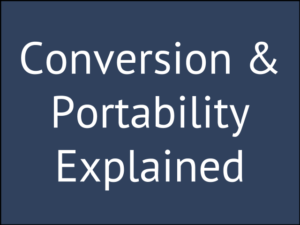 As simple as some insurance terminology seems, it’s easy to get confused about what terms actually mean in the whole grand scheme of things. One area that employers and employees often get confused about are with the words we use to describe what happens to their life insurance when they leave employment.

Those words are convertibility, portability and permanent. So let’s define these terms and then talk about them in more detail as to where we people get misled.

Group term life insurance will sometimes have a conversion option that allows you to convert your term policy to a whole life policy. Depending on the plan, this conversion will have to take place in the first month after separating employment.

Although, I’m probably one of the few people that’s actually converted group term for an employee, what you can convert to is pretty much a mystery to most people since it’s an option that is rarely exercised.

Let’s talk about a few of the reasons why it’s not.

As you can probably guess, conversion, while it’s there, isn’t used much but can be used to those who pay attention and need it.

Back in the old days, you either converted your group term life insurance when you left employment or it expired.
But then one day, some voluntary group term life plans became portable when you left employment. What this mean is that not only could you take your whole life or universal life policies with you, but you could also now take your voluntary term with you as well.
Typically though, you are no longer part of the original group and are thrown into another pool of separated employees where the plan works somewhat the same but the rates might be marginally different.
In the end, however, group term insurance will either expire someday or if it’s age banded, you’ll get priced out of it because the rates escalate at older ages.
Now the problem with portable term insurance is that people confuse the word portability with permanent coverage. I’ll often hear employees say that well, I can take my term insurance with me, meaning they think they can always keep it and it won’t ever change — but that’s not the case.
The other problem is that like the conversion option, it’s also time sensitive and gets overlooked or forgotten.
So while the concept of portability is good, employees often get misled into thinking they will always have it — which is unlikely.

As always, it’s important to review the specifics of the group plan you have in place because every plan is different.