Home » How Much Life Insurance Do I Need? 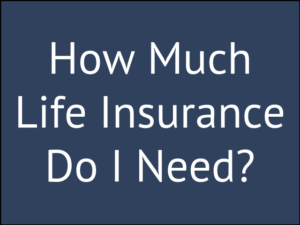 Here’s the basic formula then I walk through it in more detail below along with an example.

STEP 1: Start With An Amount For Funeral Expenses

Unfortunately, when you die, you have to pay for a funeral. Feedback I’ve received from people I’ve talked with who have actually paid for a funeral lately say it’s around $10,000.

This is the amount of life insurance you would start with.

STEP 2: Pay Off Your Mortgage

This is pretty simple. If you have a $175,000 mortgage that’s what you would add to your total. If you don’t have a mortgage and only rent, it might not be a bad idea to consider adding the amount your rent would be if it was a mortgage. To make it simple, I’d add $100,000 for every $1,000 in rent you pay each month.

Add whichever number applies to you to your total.

STEP 3: Pay off your other debts

Add up all your credit card debt, your auto loans and anything else you owe other people and add that to your total.

The second way I’d do it is take the annual income you want to replace and divide it by 4%. This money if invested at a 4% return would that annual income each and every year.

This will provide a larger number than the first option. Sometimes, this makes people uncomfortable and it’s easier to think in terms of a smaller number.

Whichever way you go, add this number to your total.

After you have your total, subtract any cash you have saved up in savings and retirement. This will give you your final life insurance you need number.

How much life insurance does John need:

Based on the simple 6 steps we calculated that John might want to pick up another $619,000 in life insurance.

In the end, there is no right or wrong answer but the above 6 simple steps will give you a really good foundation for the amount of life insurance you might need.

How much life insurance do you need? How did you calculate it?

Let me know in the comments.