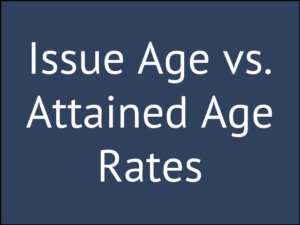 Most employees don’t realize how the rates work on the group insurance programs they sign up for. How these rates are structured have a big impact on them down the road. There are two types of group insurance rates – attained age rates and issue age rates. In this article I want to walk you through how these rates differ and why it’s important.

Let’s start first by looking at a sample age band to see how these rates are presented to employees.

Whether your group insurance rates are attained age or issue age, they will appear as age banded rates. The age bands will be in five or ten year increments. A five year age band will look something like this chart of made up critical illness rates I’ve listed below:

If you are interested in purchasing this $5,000 critical illness insurance benefit, the first step is the same for either type of group insurance rate.

A lot of employees would simply look at the rate and decide if they could afford it and leave it at that – especially if they don’t see a chart that might make them think to ask if the rates increase later or stay the same.

The Difference Between Attained Age Rates And Issue Age Rates

After I’ve signed up for my critical illness benefit, I’ll want to know what my rates might be in the future. In order to find out, I’ll need to know whether the rates are attained age or issue age.

Here’s a breakdown of the difference in how the rates work for attained and issue ages:

Given a choice between the two, which would you choose? It would make the most sense to be able to choose issue age rates if they are available to you.

Attained Age Rates Price Employees Out Of The Plan

On attained age plans, eventually the rise in rates prices employees out of the plans they got when they were young. While I don’t mind this with a product like group term life insurance because you can alway lock in some permanent life insurance that will never change in rate, I’m not as big a fan of critical illness plans that use attained age rate structures.

That’s because you’ll be tempted to leave the plan as the premium goes up. If employees ask what happens to the rates after the sign up, they might not even participate in the first place.

Promote Issue Age Rates If You Have Them

Employees, especially your younger ones, need to know how great issue age rates are. I recently offered an issue age life insurance plan and encouraged all of the younger employees to take the full guaranteed issue of $100,000 because the rate was so cheap.

Once I explained why it was so important to them, and that they locked in their age, most of the employees I talked with understood the value of it. Had I never explained how the offer worked, many would have likely passed on the offer.

It’s easy to look at the rates above and think they guaranteed. Remember though that group insurance rates can change based on experience. So unless you read otherwise, realize that even if you can lock in your age, your premium might fluctuate some over time.

Also, keep in mind if you are an employee, that if you have issue age rates this enrollment, there’s no guarantee you’ll have the same offer next year. Since these are group plans, you don’t control what’s offered so you have to pay attention at each enrollment.

If you are an employer looking at plans from year to year, you want to think carefully before replacing an issue age plan.

The rate structure on group insurance plans is different from company to company. Whether you are an employee or the person responsible for implementing your employers group benefits, you’ll want to ask whether your group rates are attained age or issue age.

This will help you better understand what will happen to your rates down the road.

Let me know what you think about attained age rates vs issue age rates in the comments below.